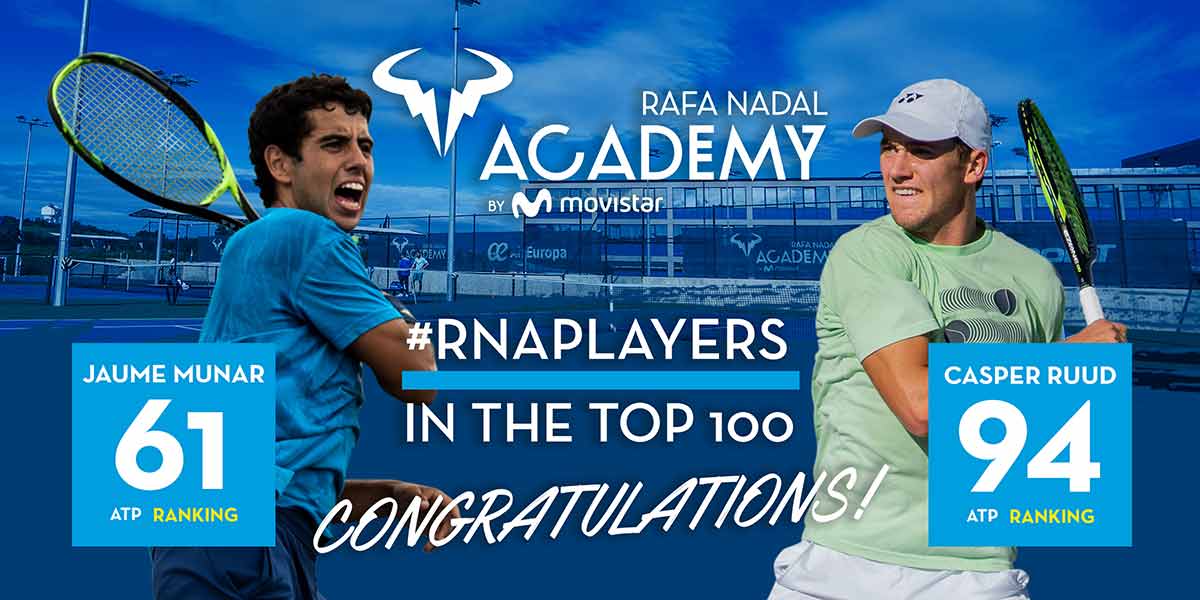 Just under six months ago, Casper Ruud joined the team at the Rafa Nadal Academy by Movistar, when he was still just 19 years of age, ranked 143rd in the ATP world ranking and considered to be one of the most promising players of his generation. His immediate goal was to break into the top 100 as soon as possible. And that day has arrived. On Monday 4 March, the Norwegian reached the highest position of his career by climbing to no. 94 in the world.

The news means that the Rafa Nadal Academy by Movistar now has two players among the one hundred best in the world ranking, with Ruud himself and also Jaume Munar, who kept his best ATP ranking (no. 61) for a further week. “I think it has been a very positive spell, both for the two players and for the Academy, as there have been some good results that allowed Casper to join Jaume in the top 100” stated Pedro Clar, one of his coaches.

The jump in the rankings by the player born in Oslo 20 years ago comes after an outstanding performance in Brazil. At the ATP 500 tournament in Rio de Janeiro, he reached the quarter-finals having come through qualifying, and one week later he got to the semis in Sao Paulo (ATP 250), leaving in his wake opponents with vast experience and renown in this kind of tournament and surface, such as Thomaz Bellucci, Joao Sousa, Calors Berlocq and Thiago Monteiro.

In total, Ruud, picked up 200 points, allowing him to climb from the no. 135 spot he occupied before making his way to Rio, to no. 94 on Monday. “In this period, Casper has managed to grow, he has worked hard and played with discipline and a game that allowed him to play his best tennis”, revealed Clar.

The Norwegian has a 5-2 match record on the ATP Tour so far this season. “I think, from now on, we’ll start to see the best of Casper, as having reached the top 100 will give him a huge confidence boost that will allow him to tap into his full potential. He is a player huge room for improvement”, continued the Rafa Nadal Academy by Movistar coach.

For his part, Munar is the Spanish player with the second greatest number of victories in 2019, only two behind the 11 of Roberto Bautista. The Balearic Islander strung together quarter-finals in Cordoba, Buenos Aires and Rio, while in Sao Paulo he bowed out in the second round. “These weeks have been very competitive”, stated Clar. “He played some good matches and for the first time he managed to beat top 20 players. On a mental level I think this will give him confidence, as he was able to see that he has what it takes to compete and to be able to beat quality players”.

Munar and Ruud are reaping the rewards of daily hard work. “I think that we are on track and that there is some good teamwork going on, so this must give them extra motivation to maintain the same approach for the next tournaments”, warned Clar before adding that “now it is time to keep working and being ambitious, because despite the good performances in recent weeks, there is always something to improve on”.