Lukas Lacko arrived in Manacor a week ago as one of the favourites to take the spoils at the Rafa Nadal Open by Sotheby’s International Realty and the Slovakian did not disappoint. The ex-world number 44 added a fourteenth ATP Challenger Tour crown to his haul on Sunday after closing out a perfect week on the centre court of the Rafa Nadal Academy by Movistar.

Under the gaze of the fans who turned out at the Academy, Lacko came back in the final against the tournament’s first seed Yasutaka Uchiyama, 5-7, 7-6(8), 6-1. He even managed to see off a match point for the Japanese player in the second-set tiebreak. From there, he rode a wave of confidence all the way to his first title of the season and added his name to the event’s winners’ circle, which also includes Bernard Tomic, the 2018 champion, and Emil Ruusuvuori (2019).

“It wasn’t easy to come here and play well, but from the first training session I felt that the conditions really suited my style of play. I tried to give my all, and after a long time I finally reached a final and won it”, admitted the Slovak after winning the trophy.

With 495 matches of experience on the ATP Challenger Tour (297-198), the current world No. 197 is a voice of authority when it comes to the circuit. “If you compare this tournament to other Challengers, the standard is very high”, he said of the tournament hosted at the Rafa Nadal Academy by Movistar from 30 August to 5 September. “At a Challenger event, you don’t expect this level of organisation or facilities, everything is really good. You really enjoy playing here, it’s incredible”.

Joan Suasi, Director of Rafa Nadal Open by Sotheby’s International Realty, thanked the over 9,700 fans who made the trip to the event over the week and followed all the health protocols. “Despite all the circumstances, I think this was the best edition of the tournament. Both players and fans alike enjoyed it and the public were extraordinary given the circumstances. Hopefully we can continue to put on many editions of this tournament”, he said after the trophy presentation. 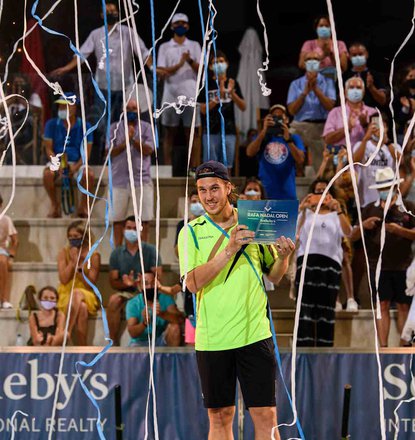