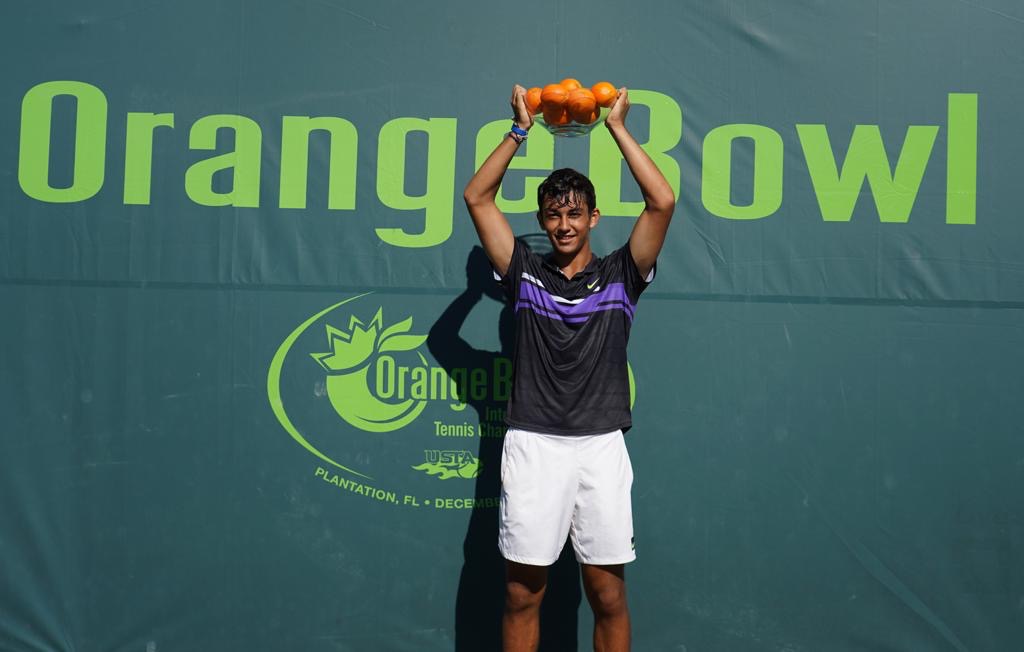 Spanish tennis just cannot wipe the smile from its face late in this 2019 season. The prestigious Orange Bowl which is held in Miami and is regarded as the World Cup of the younger categories, crowned Daniel Rincón, a Rafa Nadal Academy by Movistar player, the Under-16 champion in both doubles and singles.

The 16-year-old player from Avila, who was seeded seventh, produced an outstanding performance to claim the crown. In the first round he saw off US player Kian Vakili 6-3, 6-4, while in the second he did not have to take to the court thanks to a walkover against another American player Grant Lothringer. In the last sixteen he defeated the American Azuma Visaya 6-3, 6-4, in the quarter-finals against the Italian Giulio Perego 7-5, 6-1. In the semi-finals he defeated home player and no. 2 seed Jack Anthrop 6-2, 6-3.

In the final he maintained the form that carried him through the whole week and demonstrated the hard work that both the player and the Rafa Nadal Academy by Movistar coaches have been putting in. He barely gave his opponent, the American Gabrielius Guzauskas, a chance, beating him 6-0, 6-1.

The result means that Rincón has written his name in the history of national tennis by becoming the sixth player to win the Under-16 title. The first player to do so was Álex Corretja in 1990, who was followed by Gonzalo Corrales (1991), Tommy Robredo (1998), Georgi Roumenov (2005) and Pablo Llamas (2018).

The title at the Orange Bowl caps off a great season in which he also won two other important tournaments. At Vila do Conde (Portugal) and Casablanca (Morocco) he picked up his first ITF World Tennis Tour Junior trophies, as well as reaching another final in Luque (Paraguay).

However, this was not the only success that Dani celebrated this week in Miami. As well as his singles victory, Rincón won the doubles with Abedallah Shelbayh, another Rafa Nadal Academy by Movistar player. The Spaniard and Jordanian beat US duo Ozan Colak and Hugo Kashimoto 6-1, 6-2, capping off an unforgettable Orange Bowl.

The final Rafa Nadal Academy triumph came from Alexandra Eala’s victory in the Under-18 doubles. The Filipino player, who had produced some excellent tennis to reach the semi-finals, lifted the famous orange bowl together with Belarusian player Evialina Saskevich after defeating Canadian pair Collard / Bui. This crown brings an end to an exceptional year that has allowed Alex to end the season as number 11 in the ITF World Tennis Tour rankings.