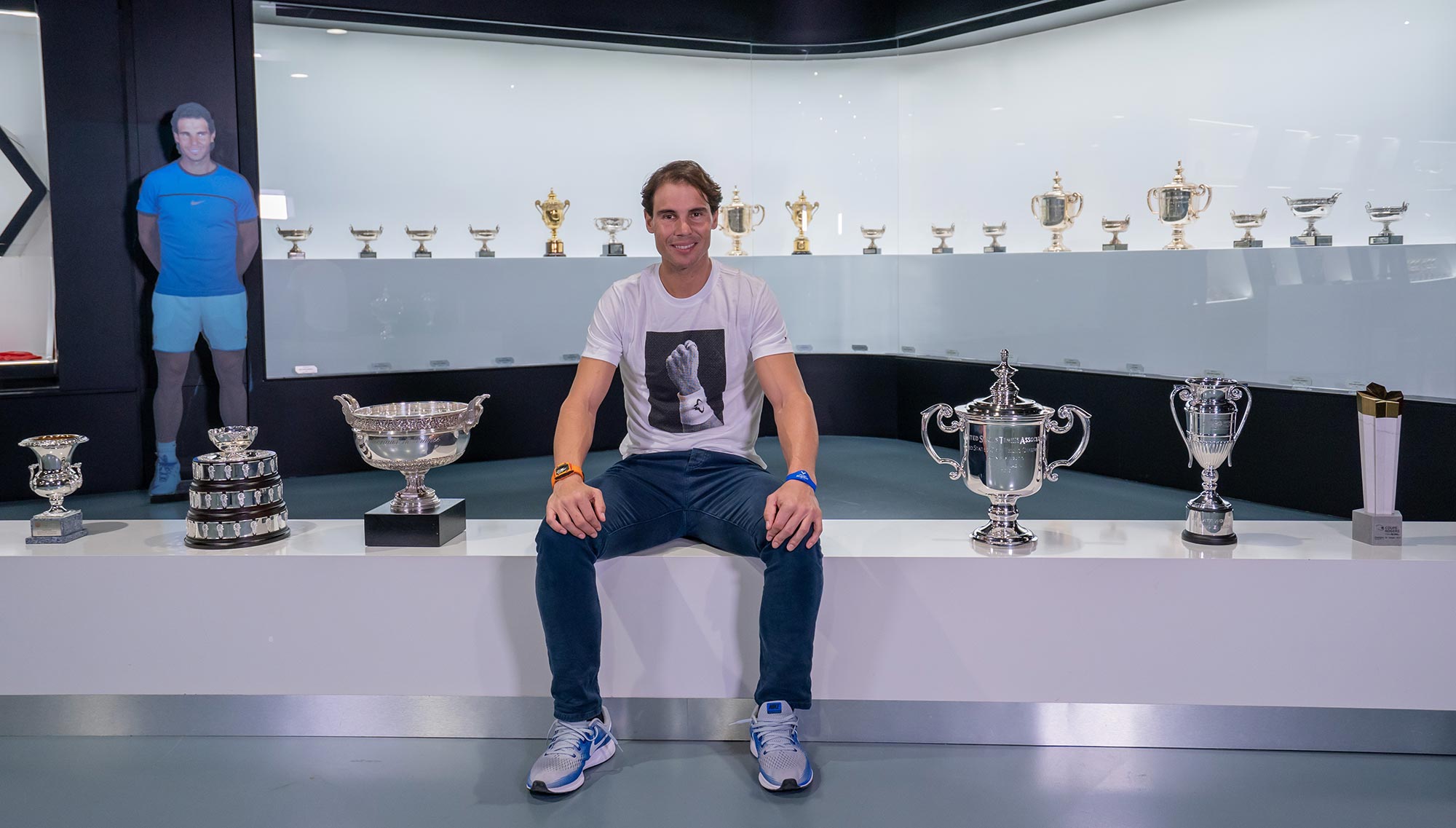 The Rafa Nadal Museum is making the most of the end of the season to immortalise the Manacor native’s extraordinary year with an historic photo.

After a dream year, Rafa Nadal closed out the season by placing the trophy he received in London from the ATP in recognition of the fifth time he has finished the season as the world number one in the Rafa Nadal Museum Xperience. The trophy now sits alongside those he picked up in 2008, 2010, 2013 and 2017 and can be seen at the facilities that form part of the Rafa Nadal Academy by Movistar.

He received the reward after a superb 2019 in which he won four singles titles, adding two Grand Slams (French and US Opens) and two Masters 1000s (Rome and Canada) to his haul. The Manacor native’s outstanding season was complemented with team victories for Spain in the Davis Cup and the European Team in the Laver Cup.

Although the start of the season was very exciting, his first title of the year would have to wait until 19 May. Until then the Balearic Islander had reached the final at the Australian Open and the semi-finals at Indian Wells, Monte Carlo, Barcelona and Madrid. But Rome proved to be a turning point in Nadal’s season. From then on he was the best player on tour, stringing together 27 victories from 28 matches between May and September.

His first title of 2019 came during the clay swing, which has rewarded him with so much success throughout his career. In fact, the trophy Nadal lifted at the Foro Italico was his ninth ATP Masters 1000 in Rome. It was an impressive win in which he produced a bagel (6-0) in each of his matches up to the semi-final, against Jeremy Chardy (6-0, 6-1), Nikoloz Basilashvili (6-1, 6-0) and Fernando Verdasco (6-4, 6-0). In the semi-finals he beat Stefanos Tsitsipas, while he won another set to love in the final against Novak Djokovic (6-0, 4-6, 6-1).

Rome became the fourth title Nadal has managed to win nine or more times, joining The French Open (12), ATP Masters 1000 in Monte Carlo (11) and the ATP 500 in Barcelona (11). On those four stages he has picked up 51.1% of the 84 singles trophies that adorn his cabinet.

After an impeccable performance in the Italian capital, Nadal’s maintained his form as he made his assault on a twelfth Musketeers Cup at the French Open. This time he only lost two sets on his way to the title in Paris, in the third round against David Goffin and in the final against Dominic Thiem. In the first two rounds he beat German players Yannick Hanfmann and Yannick Maden, while in the last sixteen he saw off the Argentine Juan Ignacio Londero, in the quarters Kei Nishikori and he defeated Roger Federer in the semi-final.

Nadal started the North American hard-court season after taking a 17-1 record into Wimbledon. On the London grass his campaign came to an end in the semi-finals, a round he reached in every tournament he entered in 2019, except for Acapulco. But on his return to competition in Canada, he re-established his dominance on tour and after beating Daniel Evans, Guido Pella, Fabio Fognini and Daniil Medvedev he claimed his 35th ATP Masters 1000 title, increasing his dominance in the category.

The title at the ATP Masters 1000 in Canada, which he had already won the previous year, was also the first Nadal had successfully defended on hard court in his career. The result meant that the Spaniard had taken 4,720 points from the last 6,000 available to him in the tournaments played, thanks to a 21-1 match record.

Despite his spectacular numbers, there was still more success to come in the US summer. Six wins on the trot at the US Open gave him his 19th Grand Slam, leaving him just one behind Roger Federer’s current haul. To earn the trophy he defeated John Millman in the first round, in his second match in New York Thanasi Kokkinakis gifted him a walkover and he then beat Hyeon Chung in the third round. In the last sixteen he defeated Marin Cilic, Diego Schwartzman in the quarters and Matteo Berrettini in the semis.

After four hours and 51 minutes and five sets (7-5, 6-3, 5-7, 4-6, 6-4), the player from Manacor closed out an astonishing run from May to September against Daniil Medvedev, that included four titles and gave him an excellent chance of finishing 2019 as the world number one, a trophy that would eventually end up in his cabinet.

Despite suffering from wrist problems, Nadal was able to participate in a Laver Cup match held in Geneva (Switzerland) and pick up a point for the Team Europe that has won all three editions of the tournament (2017-19). The Balearic Islander won the seventh point in the competition 6-3, 7-6(1) to give his team a 7-3 lead. Europe eventually won 13-11 against Team World.

Finally in the Caja Mágica in Madrid, Nadal ended a fantastic season with the Davis Cup title, contributing eight points to the Spanish team (5 in singles and 3 in doubles). It was the sixth crown for the Spanish Armada and their fifth with the Balearic Islander. In addition, it was the 100th trophy of Nadal’s career, with 84 in singles, 11 in doubles and 5 Davis Cups, allowing him to boast of a century of trophies, something very few others are able to do; John McEnroe (160), Mike Bryan (128), Jimmy Connors (126), Bob Bryan (126), Roger Federer (112), Ilie Nastase (107), Stan Smith (102) and Ivan Lendl (101).