Rafa Nadal: “We have a vastly experienced team of coaches” 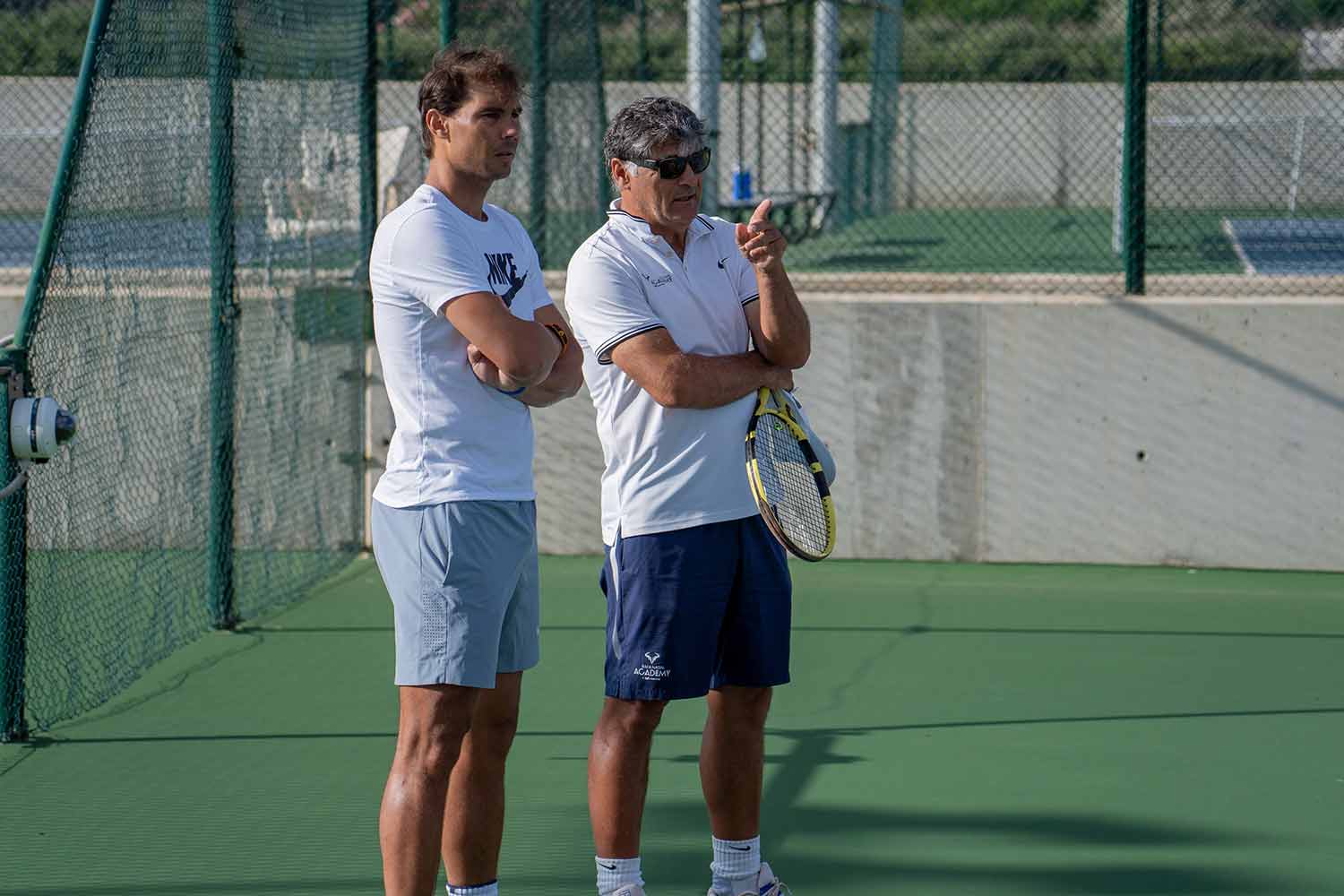 On the fourth anniversary of the inauguration of the Academy, Rafa Nadal wanted to highlight the importance of having a team that is exceptional enough to coach the young talent that trains all year in Manacor.

“This has always been one of the biggest challenges, building a great team of people and also a great team of professionals. In that regard, I am happy, as I believe we have a great team of professionals and that gives me great peace of mind. We have coaches with vast experience in every sense, particularly on the professional tour. Be it my Uncle Toni, Gabriel Urpí, Marc Gorriz, Joan Bosch, Joel Figueras or Tomeu Salvá. This group leads the project by creating the working methods and training the coaches that are coming through and have a huge desire to learn and work hard” underlined Rafa.

So, who’s who in the management team and the coaching team at the Academy?

Rafa Nadal, Founder of the Rafa Nadal Academy by Movistar

Rafa achieved one of his great aims by creating a project which was designed with his team over years until becoming a reality. The 2016 opening and growth of the Academy are a point of pride and satisfaction for Rafa, who from the first moment has been involved in its creation, development and expansion.

Carlos Costa, who during his professional career on the circuit reached the ATP top 10, after retirement became the agent of some of the best players in the world. In 2013, after 12 years working with Rafa Nadal, he became part of the Academy project with the aim of contributing his knowledge and helping young tennis players to reach their highest sporting performance, while maintaining their academic education. After establishing the project in Mallorca, Carlos has worked on the expansion on the expansion of this concept in other countries of the world with the development and opening of the “Rafa Nadal Tennis Centres” in Mexico and Greece, and established the second Academy in Kuwait.

Toni Nadal began his careers as director at a tennis school in Manacor (Mallorca), training young tennis players; but it was with his nephew Rafa that he had the opportunity to cover all levels of the sport, from his early entry on the professional circuit to some of the greatest achievements in the history of tennis.

His professional experience as a trainer at all stages with Rafa Nadal is now the pillar of methodology applied at the Academy. His qualities as a teacher are also a unique value for the management of the rest of the technical team.

Carlos Moyà was the first Spanish player in history to reach the peak of world tennis. His status as world number 1 was established thanks to a prolific career in which he won 20 individual titles. His victory at Roland Garros in 1998 and his important participation in the Davis Cup won by Spain in 2014 form part of a legendary career.

After his great start as a trainer on the circuit, in 2017 he joined Rafa Nadal’s technical team. His experience as a player and his contribution to Rafa’s game is a source of inspiration for young players for train at the Academy.

Managed by Toni Nadal, the Rafa Nadal Academy by Movistar has an excellent team of trainers with extensive professional and training experience. Leadership of each of the different areas corresponds to the Head Coaches:

After a long career on the ATP circuit (on which he reached ATP position 88 in singles and 73 in doubles), Marc debuted as a trainer in 1999 with Roberto Carretero. For over 15 years he worked with important names such as Sergi Bruguera, Albert Portas, Alberto Martín and Robin Haase. At the Rafa Nadal Academy by Movistar he performs an essential role, managing trainers, coordinating daily sessions on court and supervising the activity of the different groups of players.

Joel joined the Rafa Nadal Academy by Movistar after working in the United States Tennis Association (USTA) where he was manager of the high performance centre in charge of training the best young and professional players of the country. During his professional career he has trained great tennis players such as Juan Aguilera, Carlos Costa, Tomás Carbonell, Francis Roig and Roberto Carretero.

His function within the Rafa Nadal Academy by Movistar is to develop and supervise different aspects of the training programmes, including technique, tactics, physical and mental training. Since 2018 Joel has also designed the training and methodology plans of the expansion of the Academy through its international centres and the Clinics and Camps organised around the world.

After working at different clubs in Menorca and Mallorca, Joan Bosch began working at the l´Escola Balear de l´Esport technical training centre, where he met Toni Nadal and Rafa Nadal. After this, we worked for 7 years with former world number 1 Carlos Moya, with whom he achieved the most important results of his career. After the following period as director of the Sports Technical Training Programme of the Government of the Balearic Islands, he joined the Rafa Nadal Academy by Movistar as Head Coach, leading groups of different promising tennis players.

After his career as a player, Gabriel Urpí became one of the trainers of reference on the circuit, training Arantxa Sánchez Vicario in 1994 and 1995, when the former world number 1 won the Roland Garros and the US Open. Subsequently, he trained two former Grand Slam champions Conchita Martínez and Flavia Penneta, and more recently Elina Svitolina. In recent years, Urpí has worked for the French Tennis Federation, advising Nicolas Mahut and Caroline García and the Federation Cup and Davis Cup teams. In his extensive career as a trainer, he also trained Spanish players such as Tomás Carbonell, Francis Roig, Carlos Costa, Fernando Vicente and Beto Martín. Gabriel Urpí plays a notable role at the Rafa Nadal Academy as Head Coach, leading the consolidation and growth of women’s tennis.